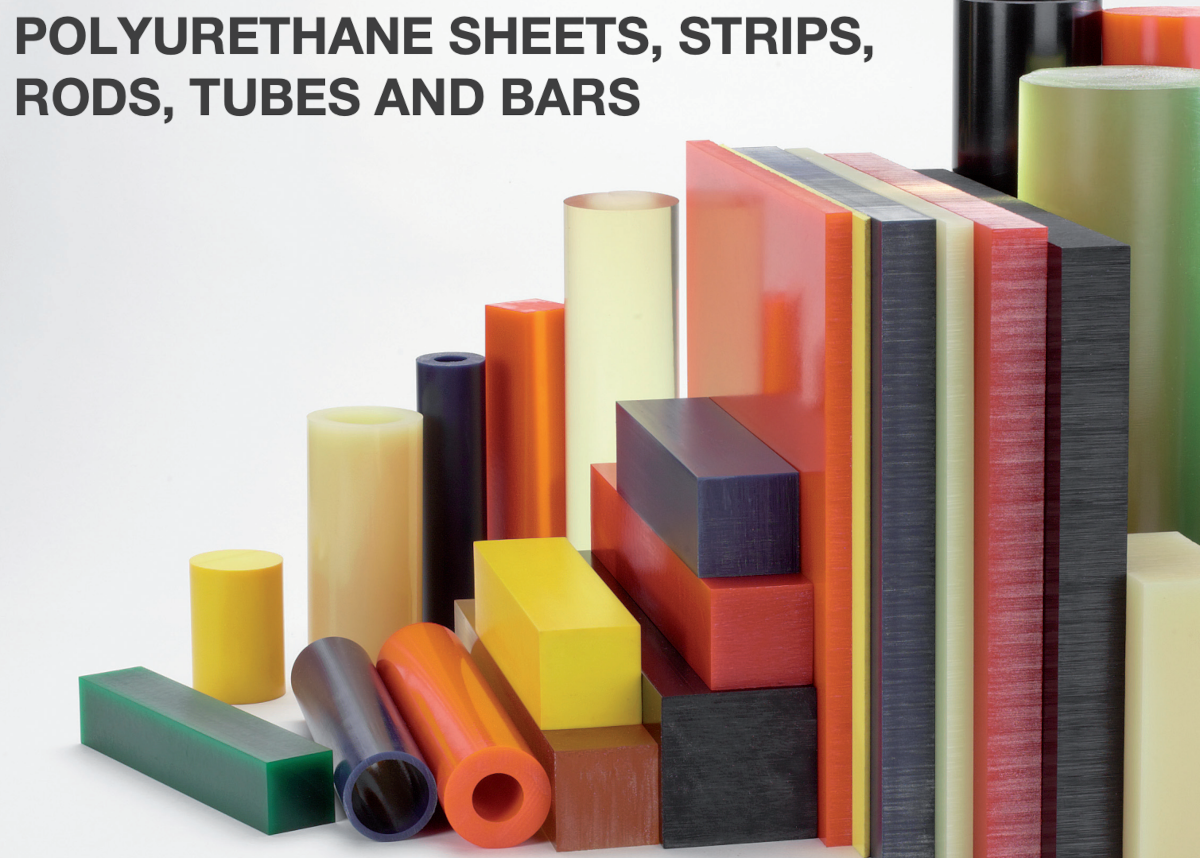 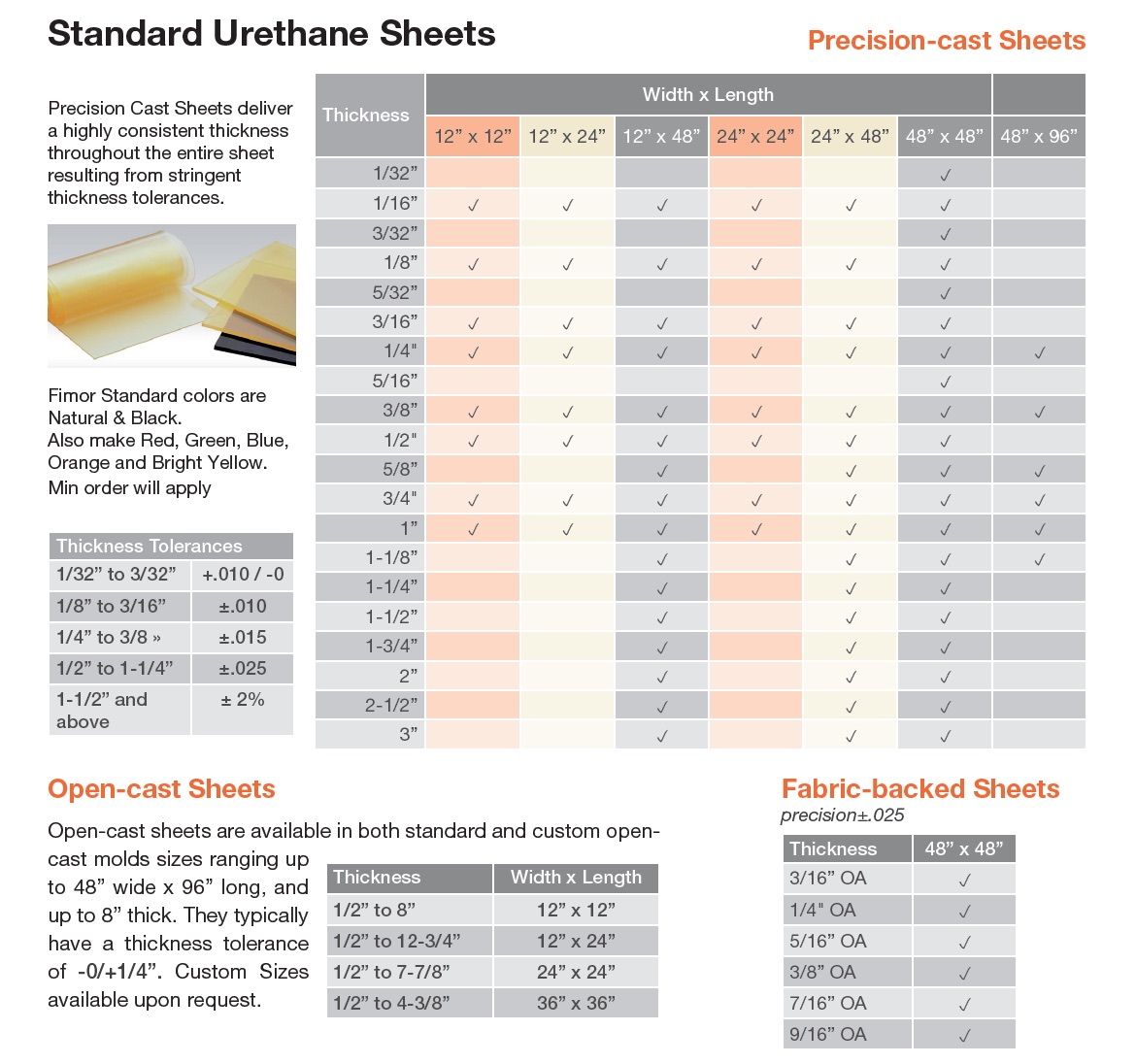 PLEASE CONTACT EPLASTICS FOR PRICING AND AVAILABILITY: 1-800-474-3688 or info@eplastics.com

Polyurethane Sheet is an organic polymer formed by reacting an isocyanate with a polyol in the presence of a catalyst and other additives. Polyurethane formulations cover an extremely wide range of stiffness, hardness and densities, and include low-density flexible and rigid foams, soft solid elastomers and hard solid plastics. Uses include high-resiliency flexible foam seating, rigid foam insulation, elastomeric wheels and tires, high-performance adhesives and sealants, seals, gaskets, carpet underlay and flexible to hard plastic components. The pioneering work on polyurethanes was done by Otto Bayer and his co-workers in 1937, although significant commercial production did not occur until 1952, due to the constraints of World War II. Other early pioneering work was done by DuPont, BASF, Dow and Mobay.

Manufacturing: Polyurethanes are in a class of compounds called reaction polymers, which include epoxies, unsaturated polyesters and phenolics. Commercially, polyurethanes are produced by reacting a liquid isocyanate with a liquid blend of polyols, catalyst and other additives. The first essential component is the isocyanate; molecules containing two isocyanate groups are called diisocyanates. These molecules are called monomers since they themselves are used to produce polymeric isocyanates. Isocyanates can be classified as aromatic, such as diphenylmethane diisocyanate (MDI) or toluene diisocyanate (TDI); or aliphatic, such as hexamethylene diisocyanate (HDI) or isophorone dissocyanate (IPDI). Volume wise, aromatic isocyanates account for the vast majority of global diisocyante production. The aromatically linked isocyante group is much more reactive than the aliphatic group, and is more economical to use. The second essential component is the polyol. Polyols extended with propylene oxide (PO) or ethylene oxide (EO) are polyether polyols. Polyols formed by polyesterification are polyester olyols. The choice of initiator, extender and molecular weight of the polyol greatly affect its physical state, and the physical properties of the polyurethane polymer.

Shapes Processing: Cast polyurethane shapes can be processed using little more than a crude scale, mixing bucket and a kitchen spatula. The mixed polyurethane can be poured into a simple mold and then cured. However, in order to achieve repeatable and demonstrable physical properties, polyurethane components are typically metered and dispensed using automatic processing equipment. Open casting, compression molding and centrifugal casting are common methods utilized to fabricate polyurethane parts. Most urethane shapes are produced using the open casting technique where the liquid polyurethane is either poured directly into the mold or, the mold is filled by low pressure injection. Finished part geometry generally drives the decision on mold type and filling technique. Shapes are normally available as rod, sheet or tube. Relatively small production runs are possible, as compared to extruded or injection molded thermoplastic polyurethane (TPU) materials. Custom parts are produced by either machining from a cast urethane block or they can be molded to the desired dimensional requirements. Both approaches allow finished parts to maintain tight tolerances. Additionally, cast polyurethanes offer the flexibility to be readily bonded to metal, urethane or fabric. Ultimate performance of the polyurethane shape or custom part can be affected by several factors: • Selection of the polyurethane composition — Polyether vs. polyester prepolymer ° Polyether: premium or low cost grades — Isocyanate type:

Characteristics: Cast polyurethanes, along with rubber, belong to a family of materials known as elastomers. When these materials are deformed, stretched or compressed, they return to the original shape once the force is removed. This characteristic holds true throughout their hardness range. One major distinguishing characteristic of polyurethane cast shapes is that they are available in a variety of durometers. Durometer is a measurement of the relative hardness as shown in Figure 7.5. Note that polyurethanes can be very soft (such as in a Shore 20 A shape) or very hard (as in a Shore 75 D shape). Properly specifying the optimum isocyante, polyol, curative and durometer yields customized performance characteristics for even the most demanding applications. Polyurethane competes mostly with, or replaces, traditional materials such as steel, aluminum, ceramic and rubber. They also sometimes replace UHMW and other plastics in applications which dictate the need for a product with superior tear and abrasion resistance, or which need a product that can be easily bonded to a substrate. Polyurethanes also exhibit excellent load bearing and flex fatigue; they also resist compression set.